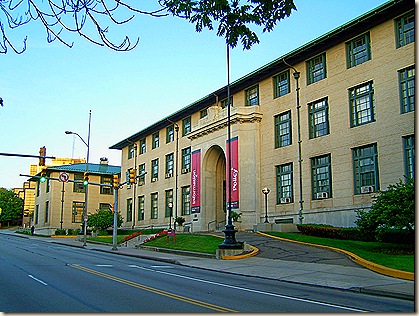 At the turn of the 20th century, a rash of deadly mine explosions and fires prompted the U.S. government to form the Bureau of Mines within the Department of the Interior.

The original mission of the bureau was to provide information and to develop techniques so the mining industry could use explosives safely in the presence of flammable mine gases and dust.  It later added the promotion of safety and efficiency in mining and metallurgy to its list of duties.

Since the city was a hub for a major coal region, the Pittsburgh Research Station became the center of the bureau’s efforts.

Its first location was a plot of land at the Allegheny Arsenal provided by the War Department. In 1917, a new building designed by architect Henry Hornbostel, who also created the buildings at  nearby Carnegie Tech (see Hamerschlag Hall), was dedicated on Forbes Avenue in Oakland.

The main building contained labs between wings for  chemical and mechanical engineering, and a 250-seat auditorium behind the building.

In the 1960s, Carnegie Mellon University acquired the building, renamed it Hamburg Hall and eventually located the H. John Heinz III School there.

While the building was designed separately from the rest of the campus, its still fits in quite well with the rest of Hornbostel’s work there.

The U.S. Bureau of Mines Building entered the National Register of Historic Places in 1974.

Source: “A History of the Bureau of Mines Pittsburgh Research Center” by Robert J. Tuchman and Ruth F. Brinkley