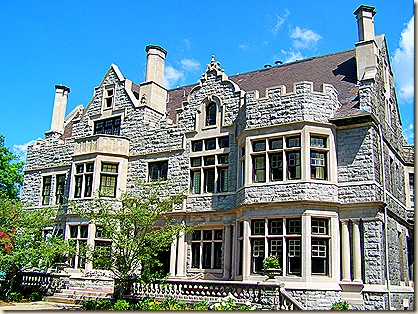 The McCook Mansion is now part of Mansions on Fifth.

Lawyer and business executive Willis McCook wanted a new home  for his large family, and $300,000 got him the above Jacobean mansion on Fifth Avenue in Shadyside  in 1906.

The mansion contained plenty of handcrafted woodwork, stained glass windows and even its own chapel.

Born in Ohio in 1856, McCook graduated from Yale, where he was captain of the university’s first football team, and studied law with a Pittsburgh firm and at Columbia University before joining the Allegheny County Bar in 1876.

McCook was a pioneer in corporate law and was the personal attorney for Henry Clay Frick.  McCook helped form coke companies for Frick and served as his attorney in a protracted lawsuit against Andrew Carnegie. The legal fees the attorney collected from that grudge match helped pay for McCook’s mansion.

Scandal touched the McCook family in early 1911 when Willis Jr., one of McCook’s 10 children, ignored his parents’ objections and eloped  with Margaret Norris, the daughter of a poor carpenter, and married her in Cumberland, MD. 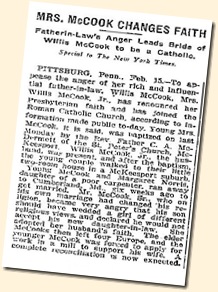 The Catholic McCooks’ objections were centered on the bride’s Presbyterian faith. Both families initially disowned the couple, and Willis Jr. was forced to find employment at the Pittsburgh Steel Company in Glassport.

The elder McCook eventually relented and offered his forgiveness – and his financial support – in exchange for Margaret’s conversion to Catholicism. She did so in McKeesport in February 1911.

The measure of McCook’s national fame was displayed by the coverage the New York Times gave to this episode.

McCook had a happier time when his daughter, Bessie, became engaged and he built a Tudor mansion  on Amberson Avenue, around the corner from his mansion. The house, now known as the McCook-Reed Mansion, was completed in 1905, a year before the main house.

The family lived in the house until the late 1930s, but the Great Depression took its toll on the McCook fortune and the city of Pittsburgh took possession in lieu of  $65,000 in back taxes.

But a February 2004 fire on the third floor ended the house’s time as student housing.

Richard Pearson, his wife Mary Del Brady and a group of investors bought the McCook Mansion for $1.4 million in 2005 with the intent of turning the mansion and the adjoining McCook-Reed Mansion into a boutique hotel.

After six years and about $8 million were spent bringing historic McCook Mansion back to its original condition as much as possible, the Mansions on Fifth opened earlier this year. It has 13 rooms, including two suites; a 1,000-square-foot presidential suite; a small bar; a fitness room; a spa and a wine cellar.

The Mansions on Fifth was added to the National Register of Historic Places in April. 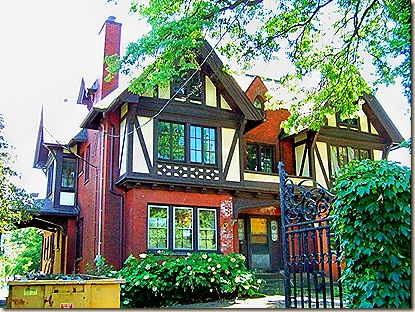 As the Dumpster indicates, the McCook-Reed Mansion on Amberson Avenue is still undergoing renovations.