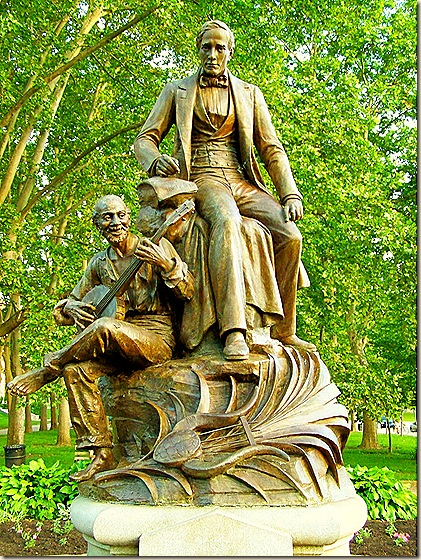 This tribute to Pittsburgh-born songwriter Stephen Foster sits next to Carnegie Music Hall, near the Forbes Avenue entrance to Schenley Plaza in Oakland.

Stephen Foster, the composer of many timeless songs, such as “My Old Kentucky Home,” “Camptown Races,” and “Old Folks at Home,” was born July 4, 1826, in Lawrenceville, which was laid out by his father.

The statue of Foster that now stands beside Carnegie Music Hall near Forbes Avenue in Schenley Plaza began its life in 1900 in Highland Park.

The Pittsburgh Press began a campaign to raise money to create the sculpture, and Foster's popularity in his hometown made it an easy job.

From the pennies of school children to the checkbook of Andrew Carnegie, the people of Pittsburgh made it possible for sculptor Giuseppe Moretti, whose work is all over the city, to create a suitable sculptural salute.

Morrison Foster, the composer's brother, assisted Moretti, who was determined "to have the likeness photographically exact," a story in the Press reported.

When the work was dedicated in 1900, thousands lined up along Highland Avenue as a parade worked its way to Highland Park, where 3,000 children sang Foster's songs and his daughter unveiled the statute.

However, respect for the statue didn't last forever, as vandals took advantage of its out-of-the-way spot in Highland Park, stealing the pen and banjo several times.

To cut down on the vandalism, the sculpture was moved to its present site, which also is across the street from Pitt’s Stephen Foster Memorial. It was rededicated on June 29, 1944.

The statue isn’t without controversy, as many have objected to the depiction of a barefoot black man sitting below Foster, which is supposed to indicate his subservience to a white man.