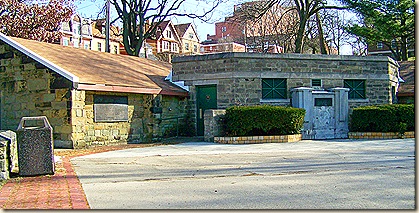 A powder magazine buried into a small hill is the only structure remaining from Allegheny Arsenal.

Arsenal Park and Arsenal Middle School, located along 40th Street in Lawrenceville, derived their names from Allegheny Arsenal, which the U.S. Army established on the site in 1814.

The arsenal, designed by Benjamin Latrobe, the architect of the U.S. Capitol, stretched from Penn Avenue to the Allegheny River. It was the central supply depot for the military’s western operations and served the nation well in all its conflicts through the Spanish-American War. 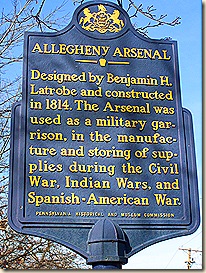 Among the items the Army Ordinance Department manufactured there were  rifle and artillery ammunition, saddles and gun carriages.

As tensions continued to build toward the Civil War, John B. Lloyd, the Secretary of War under President James Buchanan, began to shift arms from northern arsenals to the south as a reaction to John Brown’s raid at Harpers Ferry, VA.

In late December 1860, Allegheny Arsenal commander Major John Symington received orders to ship cannon to fortifications on the Gulf of Mexico. Citizens of the Lawrenceville area were outraged that “traitors” were trying to take what they considered their guns while a war with the South was brewing.

The uproar and threat of popular insurrection caused Buchanan to force Lloyd to countermand the order. 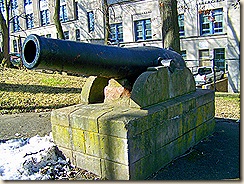 Right: This cannon, which was fired nearly 1,700 times during the Siege of Richmond, sits behind the middle school in Arsenal Park.

A more tragic event centered on the arsenal arose Sept. 17, 1862, when an explosion ripped through the facility, killing 78 employees -- the majority of them young girls.

The blast was heard two miles away and shattered windows throughout the neighborhood. It also created a grisly scene, as body parts were strewn across the grounds and pieces of the girls’ dresses hung in the trees.

About half of the victims were unidentified and now lie in a mass grave in nearby Allegheny Cemetery.

However,  the largest civilian disaster during the Civil War was overshadowed by the Battle of Antietam, which was fought the same day, and the tragedy made the pages of few newspapers outside Pittsburgh.

In the 1900s, the Army began selling off the arsenal's land, which led to the creation of Arsenal Park, the later construction of the school and the beginnings of modern Lawrenceville.

A September 2010 story in the Post-Gazette sheds more light on the lives of the people who worked --  and died -- at the arsenal. 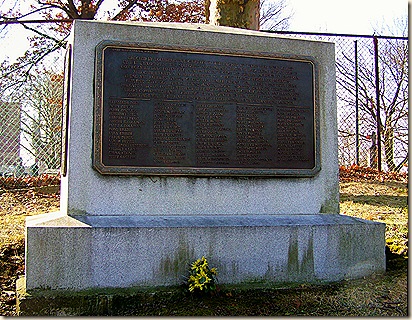 This monument in Allegheny Cemetery is located at the site of a mass grave containing victims of the 1862 explosion at Allegheny Arsenal.