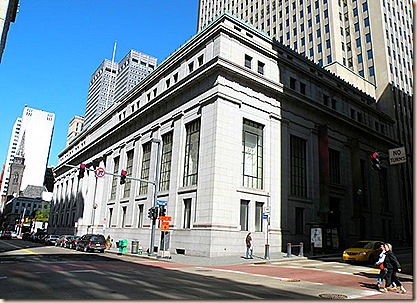 The stately former Mellon Bank building is a shell of its former self.

This blog has featured many success stories of historic buildings and sites that, through the foresight and passion of their owners, have made a successful transition into the 21st century.

These places, large and small, from the Sellers House to Highland Towers to the Cathedral of Learning, continue to serve the purposes for which they will built and add a great deal to the landscape of Pittsburgh.

This is a story of the tragic loss of an architectural gem that was lost for no good reason.

The powerful Mellon family commissioned the architectural firm of Trowbridge and Livingston, which also designed the Gulf Building on Grant Street for the Mellons, to create a palace of money for them downtown.

Opened in 1924 on Smithfield Street, the Classical structure displayed a solid, conservative face to the city while the interior featured a forest of tall, Ionic columns that added dignity to the open banking floor.

Called “the Cathedral of Earning” by some witty folks, the interior was a remnant from another age.

But it wasn’t destined to last forever.

In 1999, then Mayor Tom Murphy, in an attempt to revive downtown Pittsburgh, lured Lord & Taylor to open a department store in the building.

The city pumped nearly $12 million into the effort and ripped the heart out of the banking floor by pulling down the columns.

But to add insult to injury, Lord & Taylor couldn’t compete and pulled out in November 2004.

It’s been empty ever since.

In his book “Buildings of Pittsburgh,” Pitt professor Franklin Toker laments the fate of this elegant space:

“Serene and majestic on the outside, Mellon Bank has covered the block of Smithfield between Fifth Avenue and Mellon Square since 1924, but it has been destroyed inside. The long and airy banking hall, one of Pittsburgh's prime architectural and social spaces, vanished in 1999 when its short-sighted owners and an overeager city hall let Lord and Taylor rebuild it as a faux-Manhattan emporium.

“Fifteen tons of Italian marble in each of the Ionic columns was smashed and hauled away, leaving just their steel cores. Gone was the vast basilica-like space of the hall, 65 feet tall and 200 feet long; gone were the aisles coffered and painted deep blue with speckles of gold leaf; gone was any hint that the world's earliest venture capitalists once operated out of Pittsburgh.

“Befitting its place at the heart of Mellon operations, the hall commemorated [Andrew W.] and [Richard Beatty] Mellon with portraits and inscriptions on the walls of the vault.

"After Lord and Taylor's quick demise a few years later, the now banal interior awaits some new use.”

While it’s true that the building had been empty for some time before the tragic Lord & Taylor enterprise, that fact didn’t justify what was done to a unique building that New York would have been proud to claim.

Here’s hoping that some use can be found to salvage what’s left of the Mellon Bank building.

But I won’t hold my breath. 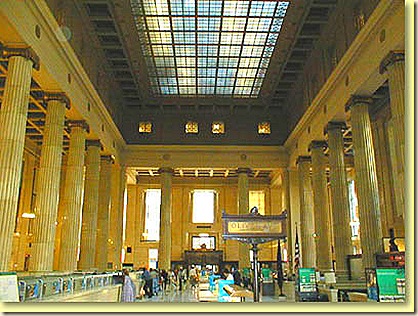 Photo by City of Pittsburgh

This was how the majestic banking floor of Mellon Bank’s landmark building on Smithfield Street looked before it was gutted for the Lord & Taylor scheme.

While doing some research on this blog entry, I found a recent Post-Gazette review of the biography of Thomas Mellon – founder of the family fortune and dynasty – written by his great-great grandson, James.

A dour man whose only interest was business and the gaining of even larger piles of money, Thomas Mellon objected to city taxpayers supplying $40,000 for the creation of the Carnegie Library and the construction of H.H. Richardson’s masterpiece, the Allegheny County Courthouse. A plain brick one would do for him.

But what struck me about this piece was how little things have changed in 150 years.

With the Civil War raging and the Union, as well as business interests, threatened, James Mellon, 18, wanted his father’s permission to put off learning the coal and iron business to enlist in the Army.

In withholding his permission, the elder Mellon held a belief that he saw as trumping any idea of patriotism or duty: His son should be making money.

This is what he told James:

"I had hoped my boy was going to make a smart, intelligent business man and was not such a goose as to be seduced from his duty by the declamations of buncombed [or bullshit] speeches."

So, just like today, the poor of the 1860s fought the fight for the rich.

Even though this is probably one in the most
uncommon techniques, many people actually choose to bake the leftover espresso that they have.
It is due to this that people are always within the search for the best home coffee machine out there.
Step 2: Once you've done so, put coffee filter as usual so it will run smoothly.

Look into my homepage: coffee maker