I know it’s July and the Pirates are playing some fun baseball, but I couldn’t resist posting a few old YouTube videos about the Penguins. 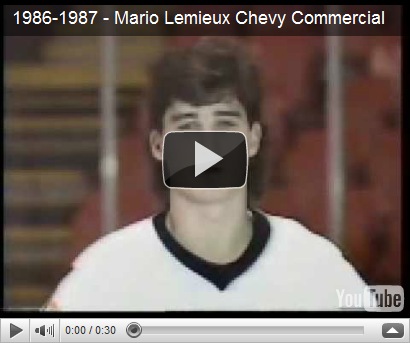 The first video features a young Mario Lemieux, sporting what looks like a half mullet, hawking cars for Colussy Chevrolet during the 1986-87 season. It starts with him showing a kid how to score a goal, then segues into the sales pitch.

His English skills are a work in progress and his accent is much more noticeable than today, but he’s still more understandable than the kid at the end of the ad. 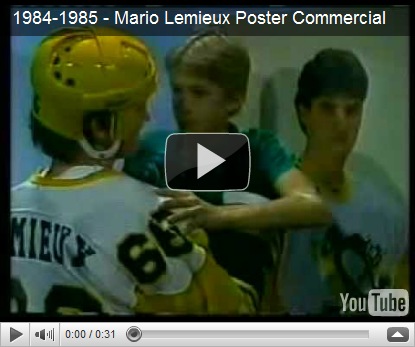 The next video, from the 1984-85 season, shows Lemieux promoting a growth-chart poster giveaway for an October game with Montreal. Mario has no lines in this one. He just puts his hand on a kid’s shoulder and lifts him to the top of the chart. From the kid’s reaction, it’s hard to tell if he’s feeling happy or creepy that No. 66 appeared in his bedroom.

An interesting point about the ad: The poster sponsor (Thrift Drug) and ticket outlets (Kaufmann’s, Gimbels and the Civic Arena) no longer exist. 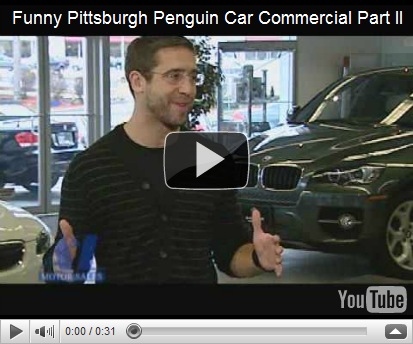 The final video is a salute to feisty forward Max Talbot, who signed a free-agent deal with Philadelphia earlier this month. Talbot shows his sense of humor in this commercial for A&L BMW.

It’s too bad the Penguins will lose him – especially to the hated Flyers – but GM Ray Shero wouldn’t give him more than a three-year deal and he got one for five years from Philly.

At least Talbot exited in a classy manner, which looked even classier since it came during the Jagr saga. He had nothing but kind things to say about Pittsburgh – and that’s as it should be. In his five seasons with the Penguins, the team and the city gave him a stage on which  he could play meaningful hockey.

But Pittsburgh should have nothing  but kind things to say about him, except for a little good-natured booing when he comes to town with the Flyers. Talbot is one of those guys Pittsburgers love: A player who covers a shortage of talent with an abundance of hard work and grit.

He also rose to the occasion in big games – and none was bigger than Game 7 of the 2009 Finals in Detroit, where Talbot ripped the Red Wings for two goals to help the Penguins hoist the Stanley Cup.

During their time with the team, these  two former Penguins players created some cool memories to get a fan through a hot July day.