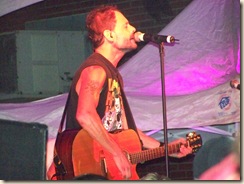 July’s Jam on Walnut, a summer series of outdoor concerts held on Shadyside’s Walnut Street one block from my world headquarters, took place Saturday night. While the older residents and I usually avoid these gatherings of rookie beer drinkers, I decided to take my camera and take in the Gin Blossoms for a while.

I had heard of the band, but, thanks to radio stations’ adversity to identifying the songs the play, I wasn’t aware that I was familiar with the hits that made them a big act in the early ‘90s.

From the bandstand set up at Bellefonte and Walnut, the Arizona boys ripped through great renditions of their biggest hits Hey Jealousy, Found Out About You, and Follow You Down as the crowd that mobbed the intersection rocked out with them. 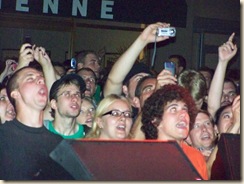 From my post at the less populated side of the stage, I was impressed with the talent and showmanship of singer Robin Wilson and guitarist Scott Johnson, who had the swarming audience in the palms of their hands. 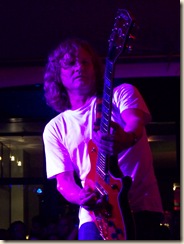 All in all, it was a much better show than I expected, especially on the street a block from my apartment.

Just one of the reasons that I enjoy looking at the world from Above Bellefonte.

I'm finally joining the millions of people around the world who are putting their two-cents worth on the Web for total strangers to snicker at.

On a regular basis, I will be filling this space with random thoughts, comments on news of the day, reviews or essays on classic films, peeks at local, American and world history, a look at the sports scene in Pittsburgh, aka the City of Champions, as well as whatever strikes my fancy.

While I'm sure there are millions of blogs out there on both sides of the aisle, you won't find me discussing politics very often. At one time I was a very political animal, but after all the bull that was slung during the 2008 presidential campaign, I can't take much more. I also can't take how serious issues aren't being taken very seriously by those who should. I'll just leave the politics to others.

My major purpose for this blog is so that I have the opportunity to write about things other than sports and to stretch my creativity. If others are interested in what I will post, the more the merrier.
Posted by Perry at 5:41 PM 8 comments: