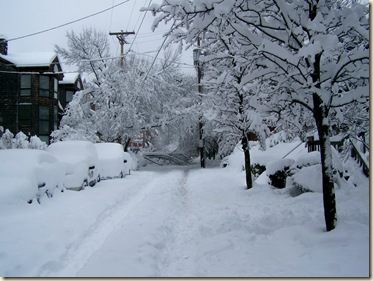 The huge snowstorm that buried a large portion of the country didn’t spare Shadyside, Pittsburgh or most of Western Pennsylvania. It began Friday night and didn’t stop until Saturday morning, leaving 21.5 inches of the white stuff behind. The above picture shows some of the damage it caused after a tree limb couldn’t handle the weight and fell onto a car up  Bellefonte Street from my center of operations. When I saw what had happened, I feared the limb had fallen on my car, which was parked on the street. However, I then recalled that it was sitting farther up the block. Whew!

Normally on a Saturday, the neighborhood is swarming with people shopping on Walnut Street, but the suburbanites were kept 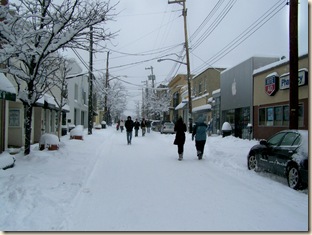 in their cul-de-sacs and things were much more quiet. Only a fraction 0f the usual crowd was out taking in the sights and they exploited the lack of traffic to turn the streets into a pedestrian mall. Parents were pulling their kids on sleds, dogs frolicked in the drifts and it seemed everyone was marveling in the beauty created by one of Pittsburgh’s worst winter storms on record.

I admit that I’m biased toward cities. I’ve always thought that they take on a magical quality when blanketed by snow. It seems to take off some of the rough edges and gives a warm, picture-postcard feel to the surroundings. In the country, it imparts more of a  bleak feeling to the landscape and makes you shiver from the cold even more.

The best thing about storms like this  is the feeling of camaraderie it engenders among those who weather them. Everyone has tales 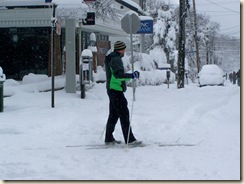 of how deep the snow is at their house, of how hard it is to  walk and the beauty they’ve seen. Like a Super Bowl or Stanley Cup run, it provides a sense of shared experience that all too often is lacking in our modern, wired world. It was great fun hearing the tales and talking with people I’d never met before because we were all in pretty much the same boat.

We were fortunate the storm started in earnest  later Friday afternoon and most had the opportunity to get home before the worst hit. But the work week begins Monday and it’s still unclear how many people will be able to get to their jobs. I go back Tuesday and at this point I’m not sure I’ll be able to get out of here. That’s when the post-storm hangover will begin.

Until them, I’m going to just going to enjoy snowy Shadyside. 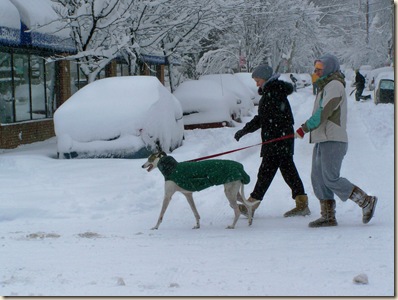