Ain’t no cure for the end-of-summer blues 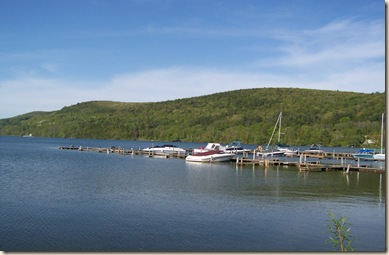 Blue skies hang over the blue water of Otsego Lake in Cooperstown, N.Y.

It’s nearly the end of August and the Summer of 2009 is drawing to a close. While Labor Day is traditionally the season’s finale, the reopening of local schools, move-in days at colleges and the end of such activities as movies in the park are a better indication that life is heading into autumn.

This time of year has always held a bittersweet quality for me. While the weather remains ideal for  another month or so, and even improves during years of steamy summers, it’s obvious that change is on the way.

That difference is evident more in the people than the climate. During the summer, the normal stresses of everyday life seem to ease considerably and folks are much more pleasant than while fighting a bitterly  cold winter. Vacations break up the monotony of the work or school year, and summer evenings are especially magical, making t 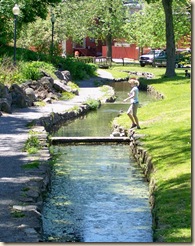 hose experiencing them  happy to be alive. Few things illustrate that better than Woody Allen’s A Midsummer Night's Sex Comedy, a light but meaningful tale of a turn-of-the-20th-century weekend.

While I’ve certainly relished summers as an adult, they meant even more when I was much, much younger. Our days were spent playing Wiffle ball, taking bike rides and manning iced tea stands to make a little spare change.

In the evenings, we often played flashlight tag and had camp outs in the back yard. During one of our encampments, we took a 2 a.m. stroll a couple of blocks up to a gas station to get bottles of pop. While we were heading back, one of our sleepy Ohio town’s police officers saw us, got out of his car and tried to apprehend us for being out so late.

The scene suddenly turned into The Great Escape as we scattered in all directions. I ended up running my fastest time ever before diving behind some bushes. I rolled against them to keep from being seen just as I heard him walking past my position. The cop eventually gave up and we were home free!

Of course, those carefree days came to an end each year, and, just like this year, I felt sorry to see them end. Then, it wasn’t so much that I hated school, and now it isn’t so much that I dread the fact that fall quickly turns into the usual gloomy Western Pennsylvania winter.

It’s just that I love summer and all that goes with it. I hope yours was something to remember as well. 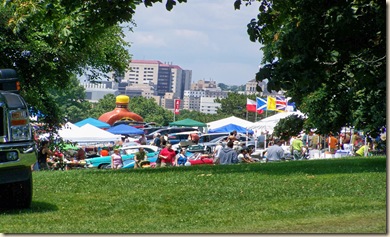 Each year, Pittsburgh’s Schenley Park is the scene of
my favorite summer event: the Vintage Grand Prix. 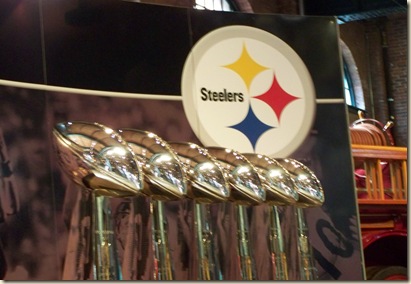 Here is a story I wrote for the Butler Eagle about the exhibit of the Steelers’ six Super Bowl trophies and photos by the team’s photographer that opened Monday  at the Heinz History Center:

While Art Rooney Sr. named his team after the metal that made Pittsburgh famous, the Steelers now are closely associated with a more precious one: silver.

That's because, after winning six Super Bowls, the team now possesses six Vince Lombardi Trophies made of it.

Through Aug. 30, citizens of Steelers Nation will have a unique opportunity to get a close  look at the precious hardware, which rarely leaves the team's South Side offices, in the Great Hall of the Heinz History Center and the Western Pennsylvania Sports Museum.

"We're delighted to be the host of six Lombardi Trophies right here in Pittsburgh," Andy Masich, president of the history center, said Monday. "It's a rare opportunity for people to come down and get up-close and personal with the evidence of the Steelers' triumphs over the years."

After the Steelers won their sixth NFL title by beating the Arizona Cardinals in Super Bowl XLIII in Tampa, Fla., the history center approached them about bringing the spoils of victory to the Smallman Street facility.

"If the Steelers have won six Super Bowls, we've got to have them here at the Western Pennsylvania Sports Museum," Masich said.

While Steelers fans are at the history center to marvel at the six Super Bowl trophies, they should head to the fourth floor for a new exhibit titled "Behind the Scenes with the Pittsburgh Steelers: Photographs by Mike Fabus," which features some classic shots by the longtime team photographer.

"Following everything, it's a lot of fun being with the team," Fabus said. "I've been traveling with the team since 1984 trying to get things that other people don't get."

The photographs on display through January run the gamut from action shots -- one of Hines Ward catching a touchdown in last year's victory over Jacksonville is his favorite in the exhibit -- to owner Dan Rooney standing amid the rubble of Three Rivers Stadium to a smiling bunch of Steelers meeting President Barack Obama at the White House.

"Mike's photographs on the fourth floor of the museum are really very special," Masich said. "They're photographs you won't see other places, stuff only the team photographer can get.

"They give you a sense of who these characters are. (The Steelers) are larger-than-life personalities, but they're people, too," he added.

For Fabus, it was a case of a hobby turning into a career.

After suffering a heart attack in 1978, Fabus took up photography during his rehab stint. He later bought a camera from then-team photographer Harry Homa. When Homa had heart troubles of his own, Fabus was hired in 1980 to assist in the darkroom.

Fabus said he and his camera were accepted immediately by the team's coaches and players.

"I made my amends with the head coaches, first Chuck Noll, then Bill Cowher and Mike Tomlin," he said. "I told them that anything that's off limits, just give me the look and I won't be there." 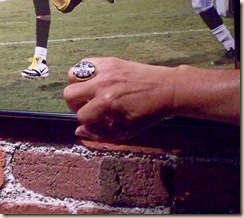 That’s what I wanted to find out Tuesday night, when I decided to head to the the new Rivers Casino, which is located near Heinz Field on Pittsburgh’s North Shore.

Outside of betting on harness racing now and again, I’ve never been much of a gambler. I learned a valuable lesson in 1979, when I made a total of $300 in bets to various people that the Pirates -- facing a 3-1 deficit in the World Series -- would come back to take the  title from Baltimore. In 1979, $300 was a fortune for a poor college student, but I just had the strongest feeling that Willie Stargell and the Lumber Company would come through in the end.

After making those incredibly foolish wagers, each inning, each at-bat – hell, each freaking pitch -- was like having my teeth pulled without a drop of Novocain. Throughout the next three games, I perched on the edge of our college flophouse couch and awaited the doom that I was certain would drop on my head like the anvil that invariably found the dome of Wile E. Coyote.

When the Pirates finished off the Orioles in Game 7 at Baltimore’s Memorial Stadium, there was no joy in my personal Mudville – just the sense that I dodged a bullet the size of a bullet train. Never again would I bet more than a six-pack or a hoagie.

Even so, I just had to get a glimpse of what all the excitement – and what all the handwringing by the antigambling types – was all about. I’ve never been to Vegas or Atlantic City, so the closest I’ve come to a gambling hall, except for the video poker machines that populate private clubs, was a peek into the slots room at what was then known as Wheeling Downs.

There, in a huge, nondescript room, sat hundreds of people on stools punching a button every 15 seconds like workers on an assembly line. The difference being assembly line workers are paid for that repetitive motion – and they aren’t plied with cut-rate drinks while they do it.

Since I wasn’t sure what to expect, I nearly was bowled over by sensory overload when I stepped off the elevator from the parking garage and onto the casino floor. Bells were ringing, lights were flashing, classic rock was blaring, shapely waitresses were wearing short skirts – it all hit me like a tidal wave.

At first, I didn’t know which way to turn, stumbling around all 360 degrees and causing passing casino patrons to give me  a wide berth. Finally, I saw a queue heading to a desk under a sign that read “Players Club” and decided to get my bearings as I waited to sign up. How it works is you earn points for how much gambling you do that go toward food discounts, free parking and free bets. If nothing else, I’ve become a playa and I’ve got a card to prove it.

Card in hand, I decided to peruse the different machines and games available. I immediately found it difficult to navigate across the floor because there are few noticeable  landmarks in plain sight. However, I learned to use the perimeter walls of the gambling area to get around. Also, the various bars helped me find my way. (Imagine that! A bar helping me see more clearly!)

There were Playboy slots, Star Trek and Star Wars slots, Wheel of Fortune slots, and players could wager at levels from a penny to, in the high stakes room, $25. Admittedly, there were few people in that part of the building, but anyone who can risk $25 on one pull of the handle or one push of a  button isn’t fazed much  by our ruined economy.

As for the clientele, they definitely were north of 35 going on 75, with grandmas in cat-eye glasses perched beside  biker dudes wearing muscle shirts and tattoos, each tending to the care and feeding of their own machines. Elegant couples also enjoyed a night out and took in the stylings of a jazz trio set up in the Levels lounge.

Something I found a bit creepy were the video black jack and three-card poker machines, which featured a big screen TV picture of a blonde dealer bearing distracting cleavage. Or, if you are so inclined, you can receive your “cards” from a studly gentleman.

What made them so disconcerting was they reminded me of some futuristic society where the people take their orders from robotic women and men pictured on billboard-sized video screens. While the game was designed for the dealers to give the illusion of making eye contact with players, it most often came off as a blank, vacant stare – except when they prodded slow-poke players to bet or fold by intoning, “It’s your turn.”

As for me, I decided to park at one of the video poker machines built into the counter at the Spiral Bar. There, I spent more than three hours playing Deuces Wild, having a couple of beers and completing the vice trifecta  by smoking cigarettes. (Note to those who hate the smell of smoke: While I admit my sense of smell has been compromised, it didn’t appear that smoke migrated into the non-smoking areas. Even in the smoking areas it wasn’t bad.

I must confess that I found it a fun time. I budgeted $60 for gambling losses and became sleepy when the damage hit $50. I could have saved $10 when I started hitting some big hands, but I decided to play until I had finished my beer. Oh well.

All in all, I was impressed by the Rivers Casino. It’s a beautiful, first-class facility staffed by attentive, friendly people that Pittsburgh should be proud of, despite all the troubles leading  to its birth.

While I won’t be a regular there, I’ll make periodic visits – I’m a playa, after all.