The Press of History 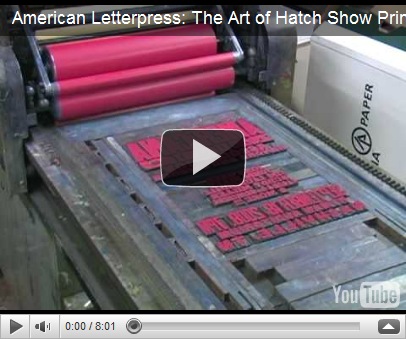 While it takes some doing, it’s possible to find something more than funny kitty tricks, stupid human tricks, and old TV stuff on YouTube. While sifting through the millions of tons of chaff, I sometimes come across a few kernels of wheat like the video posted above.

The video provides a bit of history about Nashville’s Hatch Show Print, which was founded in 1879 and now is part of the Country Music Hall of Fame.

One of the last letterpress print shops in the nation, Hatch Show Print has been churning out show-biz posters, especially those promoting country music, the old-fashioned way for more than 130 years.

Click on the video and what you’ll find is not a static museum, and the presses aren’t collecting dust. Instead, they still are employed to create products in the 21st century.

They don’t use computers and Photoshop, as is the norm today. They pull out old type from drawers, carve wood blocks for graphic elements or pull one from the archives.

Go ahead and take a few steps back in time by checking out the video. I think it’s great that this business has been saved and still is relevant today.