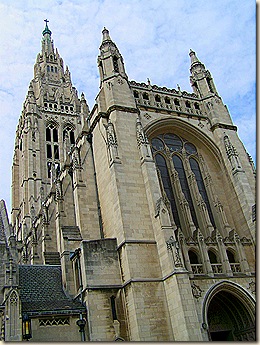 In Wednesday’s post on the Mellon Institute, I listed the buildings the Mellons helped to construct during the Great Depression.

Today, I’m spotlighting one of those buildings, as well as one they put up at the turn of the 20th century.

The congregation of East Liberty Presbyterian Church has been in the neighborhood since 1819 and built five buildings, including the present beauty on South Highland Avenue.

The large church was built with money from the Mellon and Negley families between 1931 and 1935, and designed by architect Ralph Adams Cram, who created the nearby Calvary Episcopal Church in Shadyside.

Cram also did Holy Rosary Church on Kelly Street in 1928. 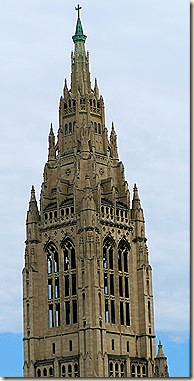 Left: A closer look at the tower.

"Although [Cram]  believed that no other church in the nation achieved such completeness of utility and art, the design lacks the élan of his earlier (though scarcely much bigger) St. John the Divine in New York City.

"East Liberty works best as part of the urban fabric: its Spanish Gothic Revival crossing tower, a 300-foot massive tower …, dominates the East End as a pendant to the Mellon-backed Cathedral of Learning in Oakland."

According to Toker in "Pittsburgh: A New Portrait," East Liberty was derived from a British term in which "liberty" referred to land just outside a city or town reserved for grazing.

While Cram called this work the crowning achievement of his career, some neighborhood wags called it "the Mellon fire escape" because they supposedly built it to atone for their sins.

Richard B. Mellon and his wife Jennie King Mellon were so attached to the church they helped to build that they decided to make it permanent. After their deaths, they were buried in a marble chamber off the nave.

The church is more than just a building. It's also a place to bring the community together, and it has been since the beginning. The good folks at what also is called the Cathedral of Hope offer tutoring, food for the homeless and has an outreach to the gay and lesbian community. 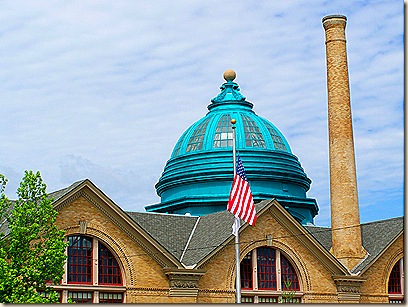 The dome of what’s now called Motor Square Garden has loomed over Centre Avenue for more than a century.

Another Mellon project in East Liberty, Motor Square Garden has had failure written all over it most of its existence:

The nearly-century long losing streak finally ended when the Automobile Association of America, better known as AAA, bought it out of bankruptcy in 1991. The building now holds an AAA branch and offices.