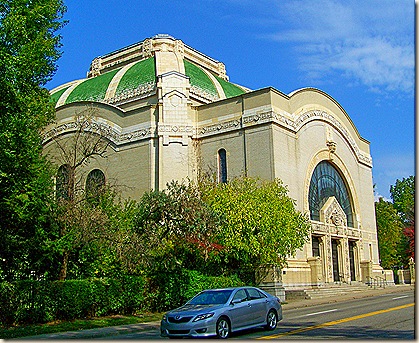 The graceful Rodef Shalom Temple has been an imposing presence at the corner of  Fifth and Morewood avenues since it opened in 1907.

The Jewish congregation formed in 1847 and that eventually would join the Reform movement and be called Rodef Shalom had a good problem: it kept growing larger.

After building several structures in Allegheny City – today’s North Side – a new temple was to be constructed in the more wide-open spaces of the East End at the border of Shadyside and Oakland in what was becoming the city’s cultural center. 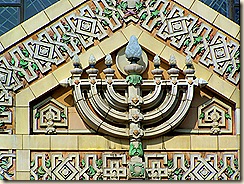 Left: An (off-center) shot
of the detail and electrified menorah over the main entrance on Fifth Avenue.

Rodef Shalom turned to architect Henry Hornbostel, who also designed such Oakland landmarks as Carnegie Mellon University’s Hamerschlag Hall and U.S. Bureau of Mines/Hamburg Hall, and the Soldiers and Sailors Memorial, for a suitable design.

A unique feature at Rodef Shalom, which opened in 1907,  is the Biblical Botanical Garden that pairs biblical verses with plants native to the Holy Land.

Rodef Shalom Temple entered the National Register of Historic Places in 1979, and is listed with the Pittsburgh History and Landmarks Foundation. 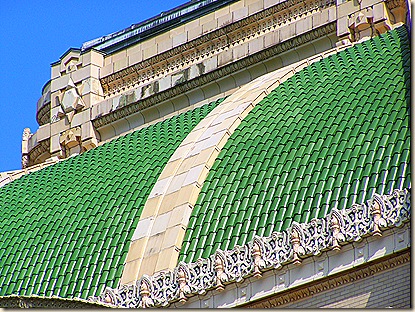