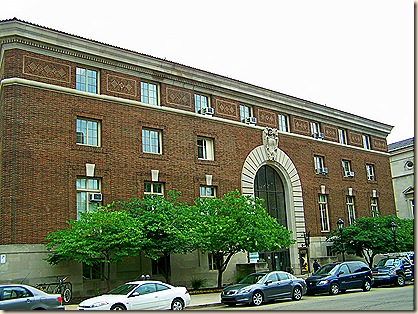 Pitt’s Bellefield Hall once served as the home of the Young Men’s and Young Women’s Hebrew Association.

When Andrew Carnegie built his library and museums in Oakland around the turn of the 20th century, he laid the first foundation blocks of what would later become Pittsburgh’s first cultural district.

With the backing of Edgar Kaufmann, the department store head and owner of Frank Lloyd Wright’s Fallingwater, the Jewish community decided it wanted to locate a facility for the cultural benefit of their young people there as well. 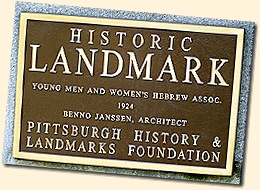 To design what would house the Young Men’s and Young Women’s Hebrew Association, the organizers engaged architect Benno Janssen, whose work we surveyed in the Pittsburgh Athletic Association and the Mellon Institute posts.

What Janssen gave them in 1924 was a combination of an Italian palazzo and Stratford Hall, the Tidewater Virginia family seat of the Lee family and the birthplace of Robert E. Lee.

He also provided a practical building that contained sports facilities, including an indoor pool, meeting rooms, and a splendid concert hall that provided an excellent venue where world-renowned musicians displayed their talents.

The YMHA, which became the Jewish Community Center, was making plans to build a larger facility on Wightman Street in Squirrel Hill, so it entered into a lease-purchase agreement with the University of Pittsburgh in 1984.

While it had no concrete plans for the building, Pitt performed yearly renovations on it until assuming full ownership in 1994.

Now called Bellefield Hall, the structure still houses sports facilities, including intramural programs, meeting rooms, and rehearsal space, a recording studio, and a renovated auditorium for the School of Music.

The building is listed by the Pittsburgh History and Landmarks Foundation and is part of the Schenley Farms National Historic District.